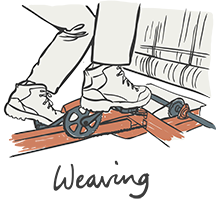 After a set-up period of about two days including the warping, it’s finally time to sit back and relax, or rather, start pedalling.

Weaving is the process of inserting a weft thread between the previously prepared warp threads. The intersection of warp and weft is what creates the cloth. On older looms the weft yarn is inserted with a shuttle. Our two looms are of the more modern rapier type, which uses a hook, or rapier head, to collect the weft threads.

Our very first loom (still going strong) was a double-width Griffith Rapier Hand Loom RH2, which we bought second-hand on the Isle of Lewis. It had been used to produce Harris Tweed, but we push its boundaries by weaving not only tweed but also scarves, shawls and throws.

After a few years into the business we decided to buy another loom – brand new this time. It’s the same type but has 8 frames instead of 4. (Frames are the shafts that hold up the heddles.) This allows us to weave more complicated patterns, such as our Brodgar scarves. You can find out more about these on our Stone to Scarf blog. 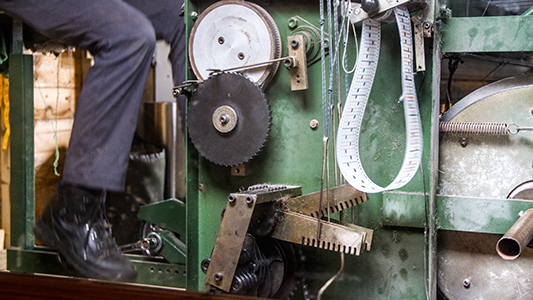 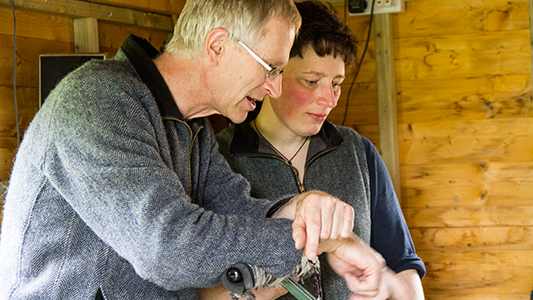 For us the best thing about our looms is that they are driven by a bicycle pedal. The weaving mechanism on each loom is connected to the pedals and a chain, which turns the main shaft. Ingenious carbon-neutral technology, and a good workout!

While setting up the looms is definitely the part of the process that takes most concentration, we can’t just switch off while we do the pedalling either. The looms have their moody days, and there’s a surprising number of things that can go wrong if they’re not watched closely. So, no television in the weaving shed. 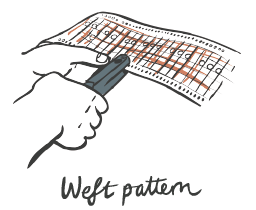 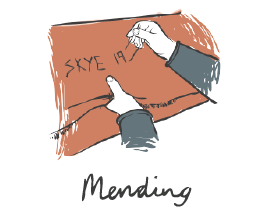