Before I became a weaver, I thought the only thing one needs for the job is a loom. I couldn’t have guessed then how far from the truth that is. And I wouldn’t have had the faintest idea of how heavy all the related machinery can be.

The latest addition to our miscellaneous and growing collection of weaving equipment is a cone winder, or rather, a heap of oily cast iron and metal that will be a cone winder once again in the near future (fingers crossed). 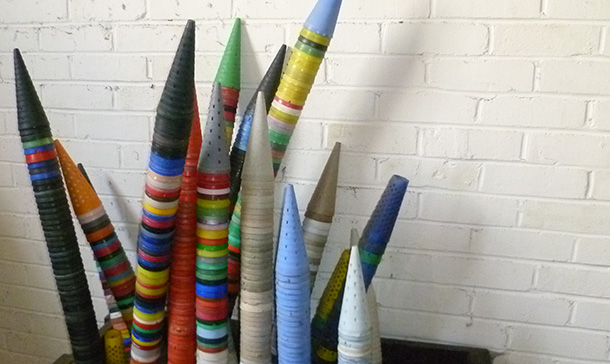 A cone winder is a piece of equipment that allows us to quickly and evenly wind up a large number of cones for warping.

From the heart of British textile production

We got our (new) cone winder second hand from our Yorkshire spinners and picked it up from a semi-abandoned warehouse in Halifax. Once the whole area around there was the heartland of British textile production, but unfortunately most of it has moved overseas. Now you only see a few big, old mill chimneys pocking out in between large, new and shiny retail stores. In our own little way and small scale croft house industry, we are hoping to help reverse the trend and bring some of the textile production back here.

So off we went from Skye with our long wheel base hire van, spent the night in its spacious back and arrived fresh and chirpy in Halifax. There we phoned our friend and font of all weaving knowledge Bob, and asked him how to go about taking the incredibly solid looking cone winder apart. ‘Just start at the top and strip it down’ was the basic advice, which we followed with great results. Unfortunately some of the pieces of cone winder still weigh about a tonne after taking even the last removable bolt off. Anyway, through a variety of manoeuvers we managed to haul everything into the well-laden van.

The second half of the day went with dismantling and loading yet another big piece of equipment – an adjustable width warping creel. To cut a long story short, we just managed to finish and leave the slightly derelict ware house before the sun set over Halifax (which is surprisingly early if you are used to the short hours of darkness in the Hebrides at this time of year).

Looking at our beautiful, green, bicycle pedal-powered loom in its new shed, makes all the aches and pains of moving it from the Outer Hebrides to the Isle of Skye via the Isle of Mull seem well worthwhile.

On a very rainy weekend in February 2011 we went on a holiday with a purpose: we wanted to find and buy one of the new generation Harris Tweed looms. They are an ingenious bit of British engineering made by a company called Griffith Textile Machines near Newcastle. Harris Tweed weavers started working with the new generation looms in the 1990s. At the time there was an increasing demand for a lighter weight double width cloth, which couldn’t be produced on the formerly common clickety-clack Hattersley looms.

As far as we are concerned, the best thing about this loom is that it is powered by a regular bicycle pedal! Roger always claims the bicycle is one of humanity’s technological masterpieces, and even though the finer points of this bold statement might be debateable, there can be no doubt about the ingenuity of the design.

To cut a long story short, we ended up buying a second hand loom on the Isle of Lewis, but unfortunately couldn’t quite fit it in our VW Golf. So Roger came back with a more serious vehicle and the long journey of our loom started. Moving it to Skye immediately would have been a bit too straight forward. Instead, we took the loom to the Isle of Mull, where we were still living at the time.

On Mull it lived in two unusual weaving environments, first a shipping container and then an old bothy on the top of a hill. The bothy was an amazing place to be weaving in, even though last winter hypothermia sometimes only seemed minutes away.

In March this year the loom moved to its final location on the Isle of Skye. Again it took quite a bit of planning and the help of our increasingly strong (or weak??) helpers, who used to be our friends before we asked them to move the loom three times. Thanks again to everyone involved!!

Well, that’s the end of it, or rather the beginning. Since March we have spent our time weaving, setting up the rest of our heavy equipment (I keep saying, we should have started an embroidery business…) and generally settling in on our new island. Really enjoying it!

We were delighted to receive our first delivery of products.