You are here: Home / Blog / Technical fix: The nuts and bolts of weaving 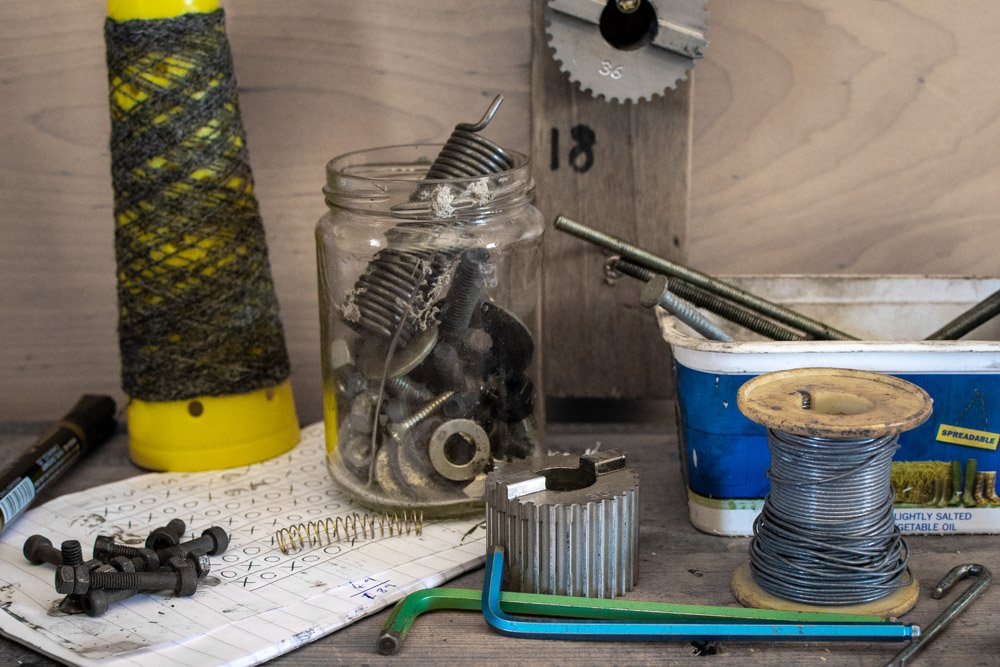 We talk a lot about the inspiration for our weaves and the creative design process behind them. But we wouldn’t get anywhere without the cogs, chains, wheels and winders that make everything happen. So we thought it’s time to let some of our technical challenges – and fixes – take centre stage. 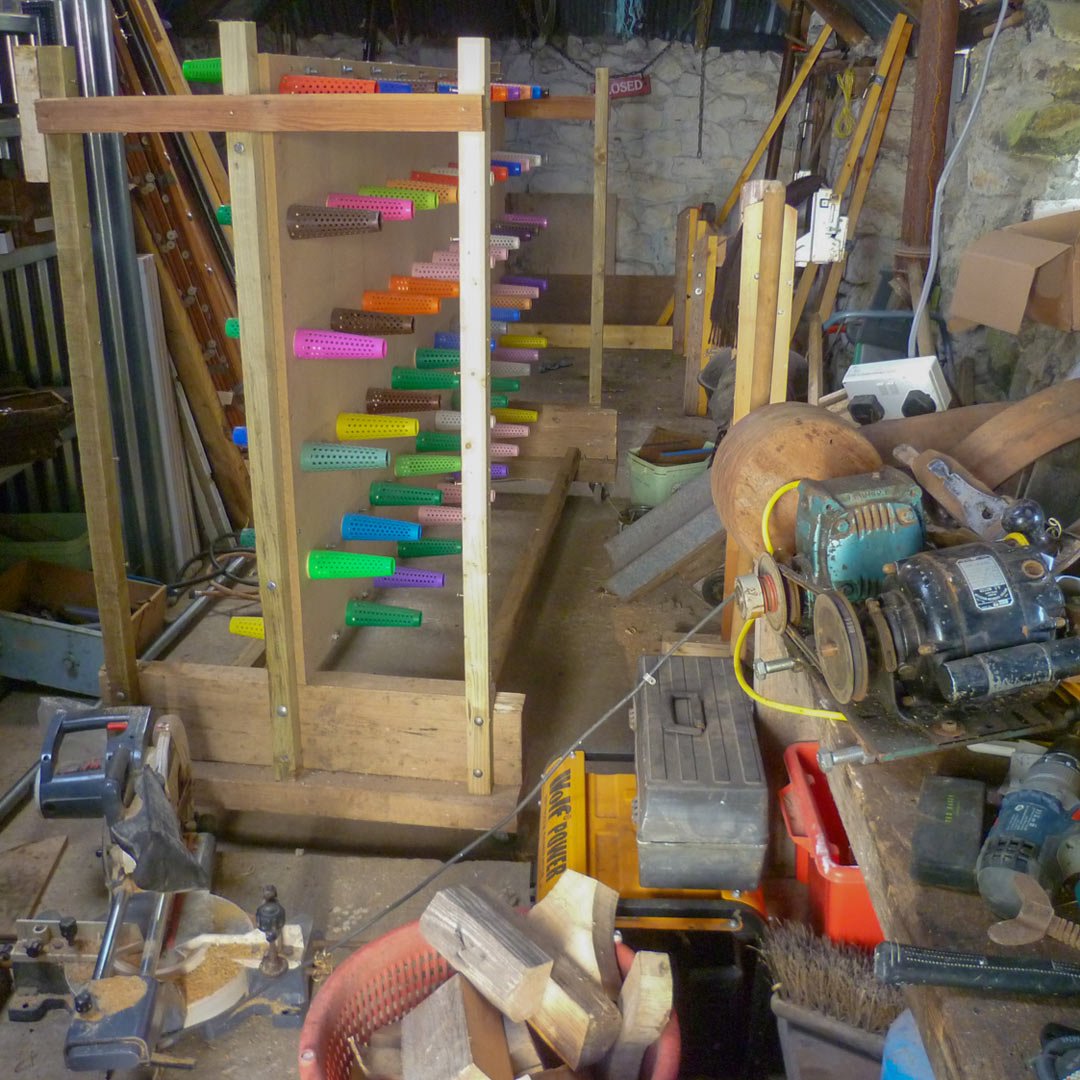 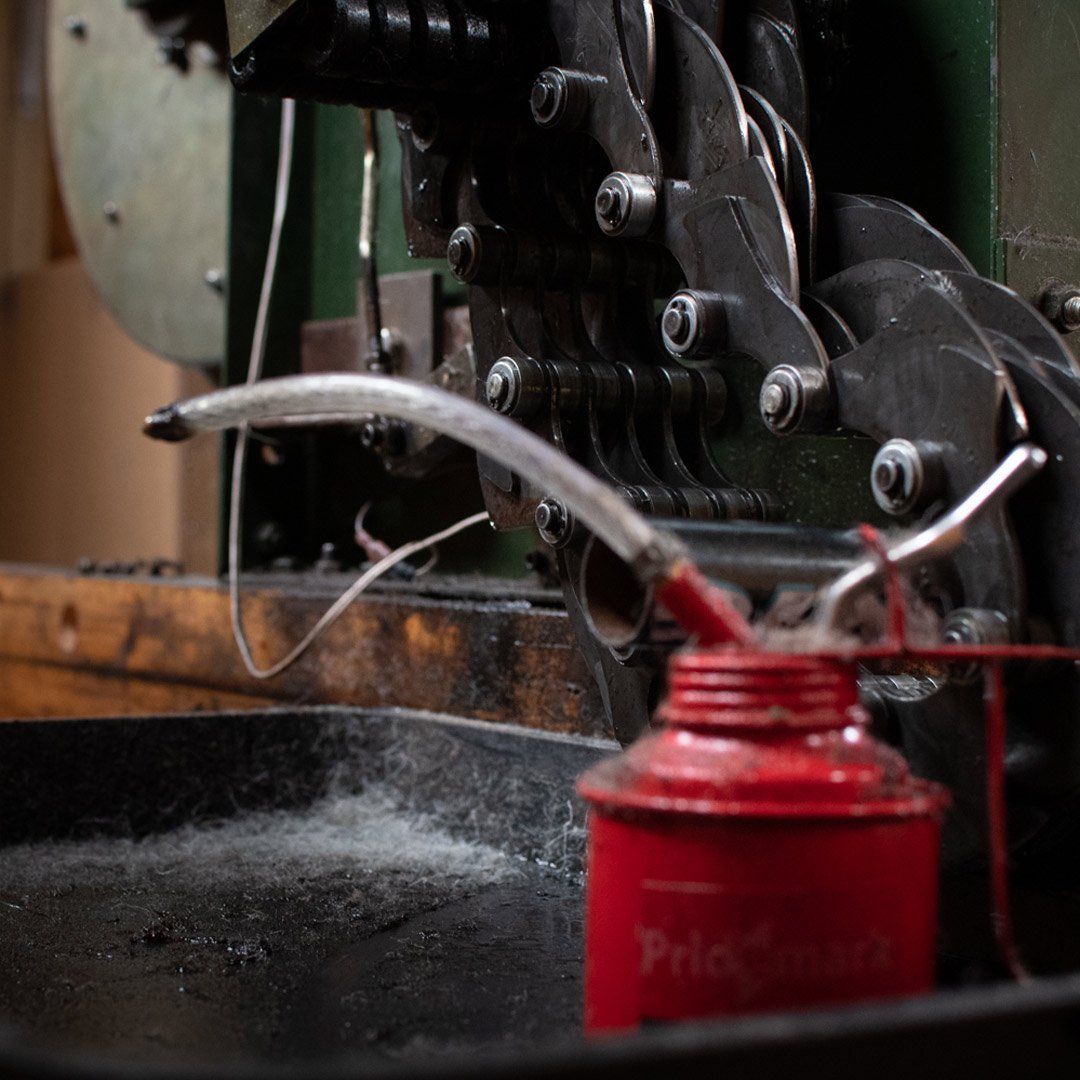 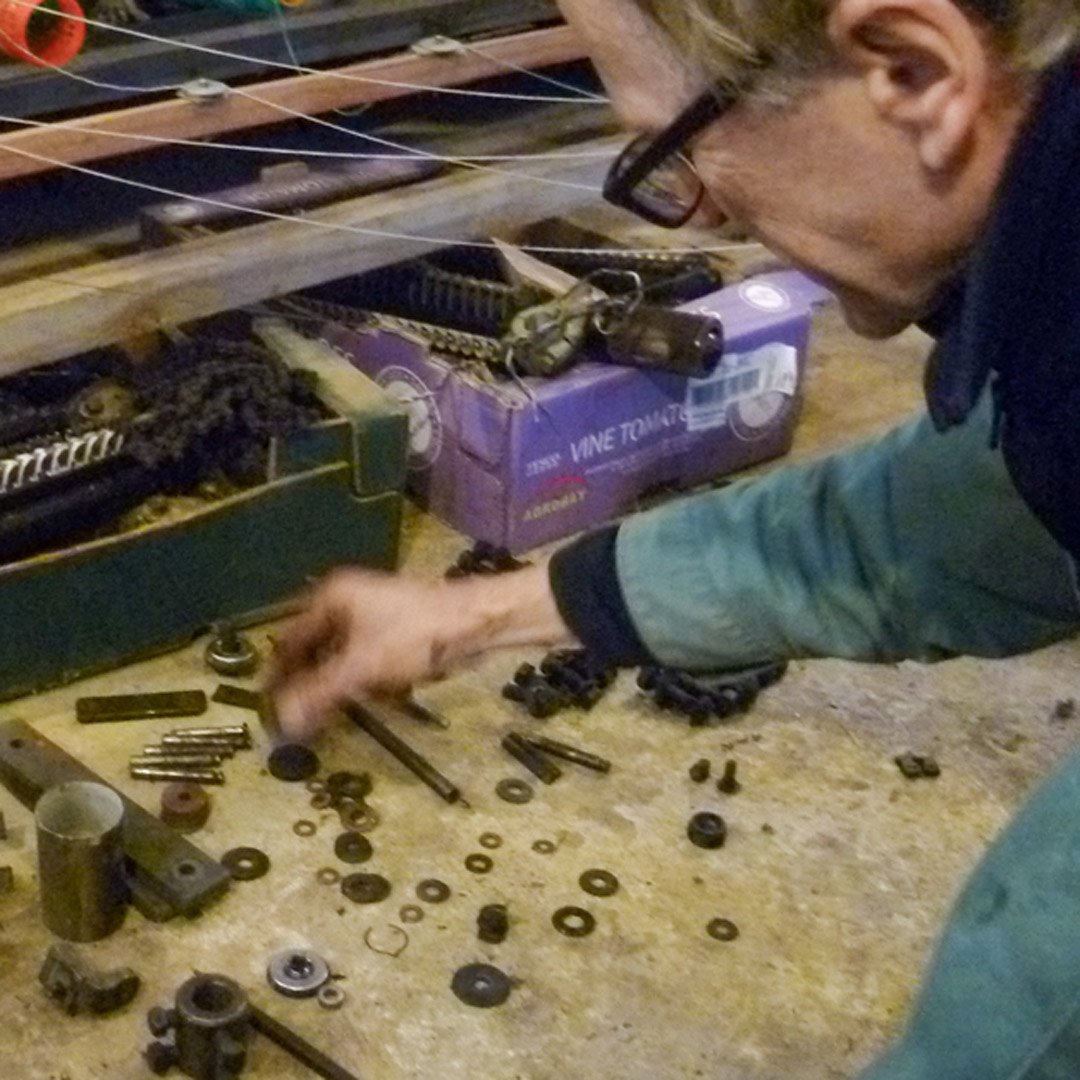 When we started out we built some of our own equipment which was certainly a good way to know it inside-out. We’re especially proud of our warping wheel, which we made from an old tractor rake and various other bits and pieces. It’s still going strong.

When our equipment’s not hand-made it’s often got an interesting back story. Our creel was salvaged from an old spinners in Yorkshire (replacing our original hand-made one). We bought our first loom second-hand on Lewis; and our button-holer is a 50-year-old classic. (A Reece 101 for any button-holer fanatics out there!)

We’re always thinking about how we can improve. It was a big day when we upgraded our cone-winding system from a hand-held drill to a proper winding machine. And we have Roger’s cousin Phil to thank for devising a bespoke motor to take some of the back strain out of warping.

But most of our upgrades are small scale and somewhat improvised. Roger likes to say our attitude is like that of the British cycling team – going for the incremental improvements or ‘marginal gains’ that can together make a big difference. Well, it certainly worked for them.

People often ask us how much time we spend maintaining our equipment. We keep the chains oiled but otherwise there is surprisingly little day to day maintenance. But what does take time (and brainpower) is fixing the things that go wrong.

If you’re a weaver you’ll know how temperamental looms can be – whether at hand loom level or industrial scale. In a big mill you’d have someone called a loom tuner whose job it is to look after the equipment and fix problems. But here, it’s down to us.

Paul and I are pretty good at spotting and diagnosing a problem, but it’s Roger who is our real Mr Fixit. So I’ll hand over to him for this bit:

Roger says: “Often problems are quite hard to diagnose – especially when the weaving is going full tilt. So I often film it and slow it down to work out what’s going on. Often, the part we need doesn’t actually exist, so I have to create it myself.

“I spend a lot of time fiddling around in the workshop. I think it’s something I must have inherited from my Dad, who spent countless hours in the shed here and would never give up. Sadly he’s not with us any more but I treasure his many ‘bodged’ items around the place.

“Pretty much every day there’s a something unexpected to get your head around. It might be threads not picking up, an alarm not going off or, like the other day, weird clunking noises emanating from the loom. But I do like a technical challenge and it certainly keeps things interesting.”

We also sometimes get asked about our biggest disasters. We’ve had pedals fall off before which isn’t great, but probably the worst thing is when the rapier comes flying out of the warp. We used to call it a ‘shark attack’. If you’ve seen how the rapier tears its way through the warp threads you’ll know why. Fortunately we’ve found a way to stop that happening now.

It has to be said though, we don’t make life easy for ourselves, or our equipment. Our two looms were designed for weaving simple widths of Harris tweed, but we like to push them further. We’ve modified them so they can do longer pick repeats and we’ve also added lots of extra lenos (the threads that secure the edges) so that we can weave several scarves across the loom.

We also love experimenting with new weave structures. We’d like to continue to increase the complexity of our weaves this year. We’ll need bit of improvisation and no doubt we’ll meet lots more technical challenges along the way – but it will be fun trying.