You are here: Home / Blog / Stone to Scarf 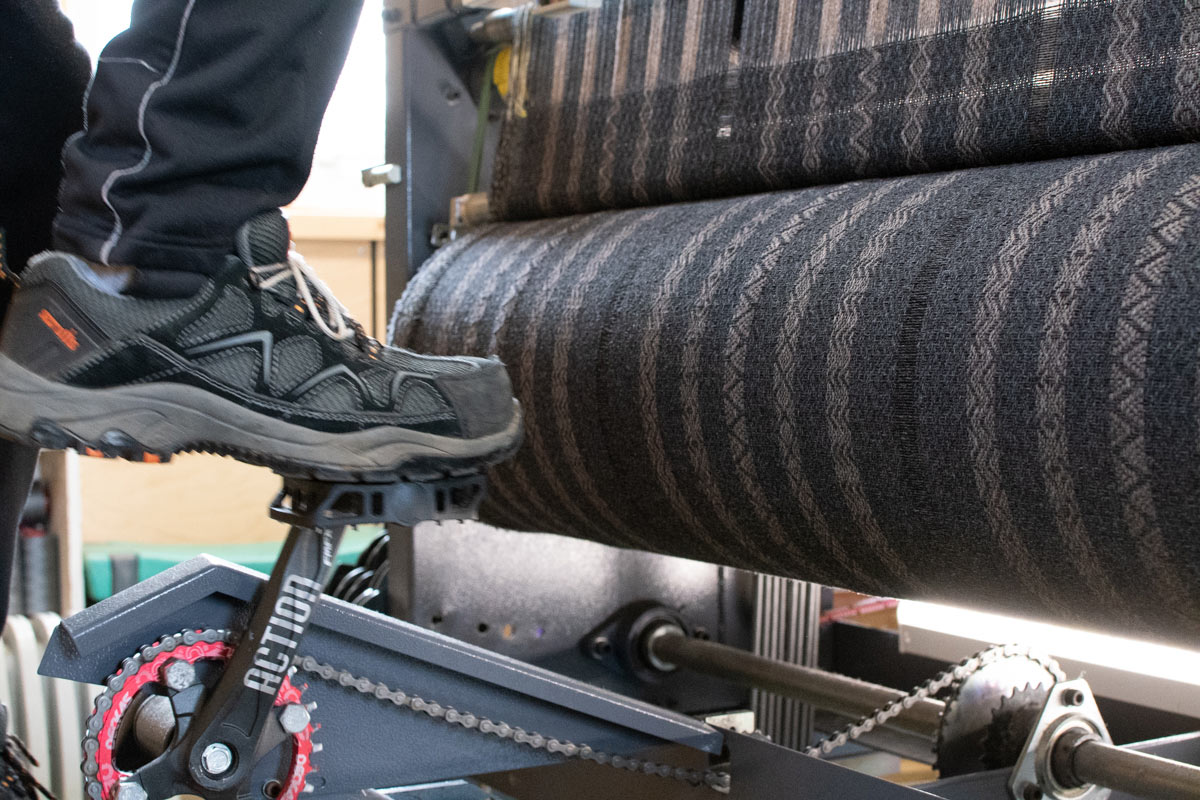 Although our designs are usually inspired by Skye, we sometimes go a bit further afield. So for our latest range of scarves we’ve been travelling (metaphorically) over the sea to Orkney – and way back in time.

It all started with a trip to Edinburgh’s National Museum of Scotland a couple of years ago. Wandering around the Neolithic collections I was transfixed by a carved stone. It had incised patterns of zigzags and chevrons between sets of parallel lines. I immediately thought of weaving (it’s never far away from my mind!) and I visually filed it away for future reference.

This winter as I was playing around with some pointed twill on the sample loom, I realised that I had found the perfect weave structure for ‘my’ stone. Wanting to know more, I contacted the National Museum and their super-helpful Senior Curator, Dr Hugo Anderson-Whymark, filled me in. It turns out that the ‘Brodgar Stone’, as it is known, was found in the Ness of Brodgar on Orkney in 1925. At the time it was believed to be part of a Bronze Age burial cist, but since then archaeologists have found out that it is much older.

The Ness of Brodgar is in fact a major Neolithic settlement. The first activities there have now been dated back to more than 5000 years ago. Excavations at the site began in 2003 and are ongoing. It’s one of Europe’s most exciting archaeological sites and the deeper the archaeologists dig, the more complex the site turns out to be. There is evidence of human activity here over a period of at least 1200 years, and over 30 structures have now been uncovered. The spot where the Brodgar Stone was found turns out to be not a burial cist but a large stone building (‘Structure 8’), constructed c. 3000 BC.

The Brodgar Stone’s incised patterns are typical of late Neolithic rock art in Orkney, with straight lines, chevrons, zigzags and crosses. Over 900 stones with similar decorations have been found at the Ness of Brodgar site. The meaning of the symbols – if any – is unclear, but it’s understood that stones were often decorated in several stages over a long period. This made me think of graffiti being added to a wall over time and somehow made me feel closer to our ancestors.

I was also interested to learn that the Neolithic period was full of colour. We tend to think of the ancient past in monochrome but there is evidence at the Ness of Brodgar of the use of colours such as ochre and haematite, an iron oxide.

Back on the sample loom, I set about trying to translate the stone’s patterns into weave. I had great fun experimenting with different pointed twill variations that would work well on our 8 shaft loom. Pointed twill is a structure that creates diagonal lines in the same way as regular twill, but as the twill threading is reversed after a number of warp threads the weaver can create chevrons and zigzags.

The final weave, which we are using to create scarves, has five parallel lines of different geometric patterns running along its length. For colours we decided to have one ‘stone coloured’ and three other more colourful variations. While not aiming to copy the Brodgar Stone exactly I hope the pattern might evoke something of this magical and mysterious place.

If you’re interested in the fascinating developments at the Ness of Brodgar site you can follow their blog and find our more on their website. There’s a good little video too. Sadly I’ve not seen the Ness of Brodgar excavations myself as I visited Orkney just before the discoveries. There were still plenty of other ancient sites to explore there though; I loved the way the ancient stones and monuments sit among the living landscape. I very much hope to return before too long.

Meanwhile, the scarves have turned out beautifully and you can now buy your own bit of Neolithic neckwear in our online shop.