You are here: Home / Blog / How Skye Weavers came to be powered by pedal

Both of us have always loved cycling and Roger believes that the invention of the bicycle was one of humankind’s greatest achievements. I think cheese and wine are a very close second, but don’t let me digress. 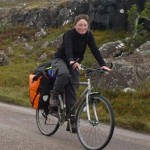 Going right back to the beginning, the pedal-powered Skye Weavers probably wouldn’t even exist, if the bicycle hadn’t been invented (or the wheel for that, but that’s going a bit too far). Travelling by anything quicker than a bike just doesn’t allow enough time to stop, look around and meet people.  It took me well over 1000 pleasurably slow bicycle miles to find Roger, who was hiding away at the most southerly point of a remote peninsula on the Isle of Mull.

My holiday on the Isle of Mull turned into a rather more permanent arrangement, but I’m going to fast-forward through those years and get straight to our bicycle pedal-powered loom. When we first heard of pedal looms being used on the Outer Isles to weave Harris Tweed, we were immediately intrigued. What a great way to produce fabric: carbon neutral, clean, quiet, potentially pretty fast, and a good workout, as many people have pointed out to us. (The physical evidence of that last point is a bit meagre unfortunately.) 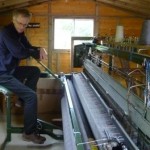 Events moved us from thoughts to action and about one and a half years ago we went to Harris and Lewis to try and find a loom to set up our own weaving business. We were lucky enough to find one just north of Stornoway! We first moved our newly acquired Griffith Rapier Handloom RH2 to the Isle of Mull and then up to Glendale on the Isle of Skye, where we settled down in February this year. The rest is history, or it will be anyway once a bit more water has gone down Glendale’s river Hamera. One thing is for sure, we’ll keep doing a lot of cycling and won’t even have to bother with waterproofs any longer.